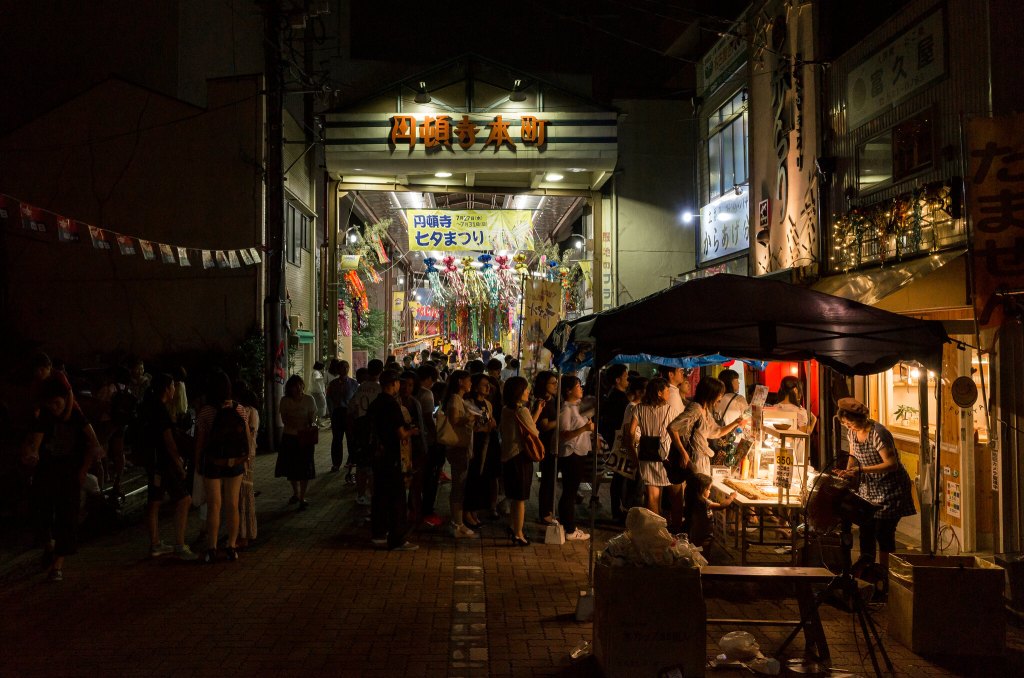 Summer is a time for festivities and fun in Japan and as Tanabata (Japan’s Star Festival) draws closer, people up and down the country get well and truly into the party spirit. Celebrated on different dates in different regions, Tanabata kicks off on 7th July and continues throughout August with festivals, tasty street food and colourful traditions.

Many of Japan’s celebrations are tied to an ancient myth or legend, and Tanabata is no exception. The Star Festival is said to be inspired by the celestial Chinese folklore story of The Weaver Girl and the Cowherd featuring Tentei (Sky King), his daughter Orihime and cow herder Hikoboshi.

The story goes that Princess Orihime was so busy weaving beautiful cloth for her father that she had no time to search for a soul mate. As a solution, Tentei arranged for Orihime to meet Hikoboshi the cow herder, they fell madly in love and got married soon after. The course of love never runs smoothly however! As a punishment for neglecting their work duties, Tentei sent Orihime and Hikoboshi to opposite ends of the Milky Way, only allowing them to meet once a year (on the seventh day of the seventh lunar month) if they promised to work hard for the rest of the year.

It was Empress Koken who introduced Tanabata to Japan for the first time, all the way back in 755. During the Heien period, Japanese aristocrats would celebrate by writing poetry and star gazing for inspiration. During the Edo period, Tanabata became more widespread and the tradition of writing wishes on pieces of paper (tanzaku) and hanging them from bamboo was born.

Seven good luck talismans (including tanzaku) are displayed during Tanabata and if you’re in Japan during July and August it will be hard to miss them! Decorations include multi-coloured streamers (fukinagashi) representing thread and the wish to become better at sewing or weaving, kinchaku purses, which are hoped to bring prosperity and origami cranes (orizuru) which symbolise good health and a long life.

During Tanabata, Japan comes alive with the sights, smells and sounds of summer festivals (matsuris). Colourful floats and parades weave up and down the streets, live music fills the air, stalls selling delicious street food tempt passers by and after-dark firework displays light up the night sky.

Tanabata is celebrated on different dates in different regions of Japan. Some use the Japanese lunisolar calendar and others use the Gregorian calendar, celebrating a month later.

One of the largest festivals takes place in downtown Sendai, Miyagi from 6 – 8 August each year. It kicks off on the evening of the 5 August with a spectacular fireworks display on the banks of the Hirosegawa River, followed by 3 days of festival fun. Shopping centres are decked out with thousands of streamers, giving the impression of walking through a forest of colour.

The Asagaya Tanabata festival in Tokyo is another busy summer event worth visiting. As well as the usual Japanese matsuri festivities, this event features colourful, larger than life mâché creations which decorate the 700 metre long shopping mall and nearby streets. Local children craft their favourite animals, anime and Disney characters for others to enjoy.

No special occasion in Japan is complete without some tasty food to mark the occasion and Japanese summer festival food is deliciously moreish.

Take the heat off by preparing a bowl of chilled summer somen noodles. Or if you have kids at home then these kawaii character noodles are a fun alternative, and healthy too.

If you fancy something even more refreshing, then shaved ice with syrup is definitely the dish for you. Known as kakigori in Japan it’s a popular festival treat that’s much needed in the heat and humidity of Japanese summer time.

Other festival favourites include deep fried takoyaki octopus dumplings which has that perfect texture combo of crispy and chewy, and yakitori grilled chicken skewers  – great with a sweet, soy based sauce and cooked on the BBQ.