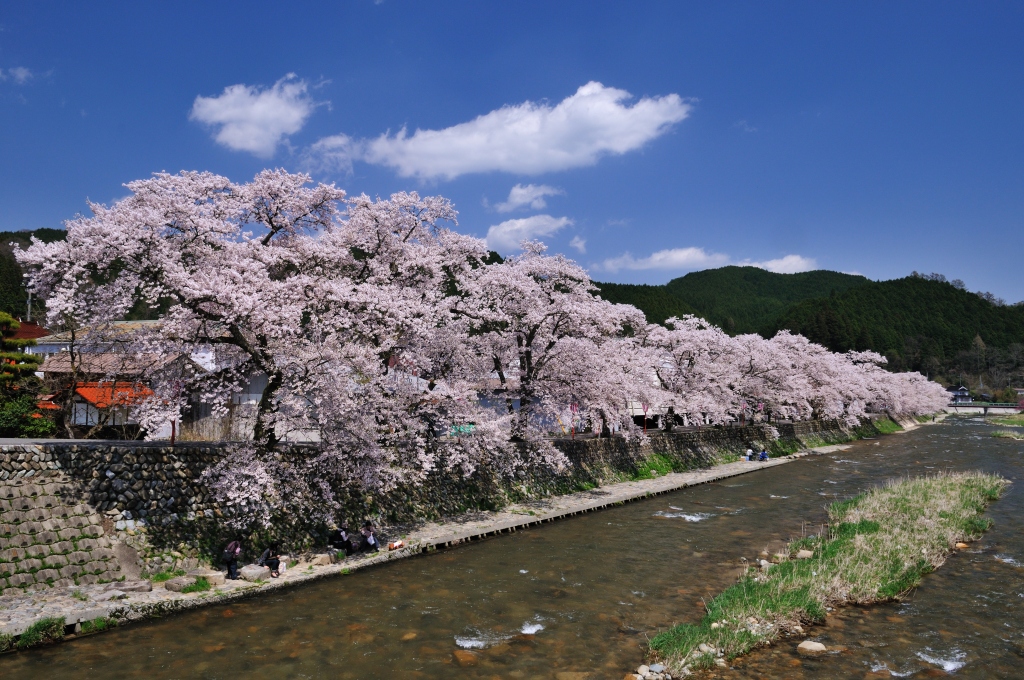 Celebrated for its rolling hills, pasture land and green meadows, Maniwa City is located in northern Okayama prefecture. For those looking to explore one of Japan’s most unique areas, away from the usual tourist hotspots (Tokyo, Kyoto & Osaka), we recommend you visit this wonderful ‘city of flowers’.

To make your visit more enjoyable, we’ve compiled a list of some of the best places to see and things to do while in Maniwa City.

Rated as one of the top 10 things to see and do in Maniwa on TripAdvisor, Daigo Zakura is a giant sakura tree that is said to be over 1000 years old. It’s the largest tree in Okayama, and stands on a hill between Katsuyama and Ochiai. The tree got its name after Emperor Go-Daigo visited 700 years ago. It has subsequently been selected as one of the best 100 trees in Japan and is a recognised monument of Okayama prefecture.

If you like the outdoors and moments that allow you to appreciate exotic flora and fauna, then you’ll enjoy a visit to the Hiruzen herb garden. With over 200 varieties of herbs and seasonal flowers you can enjoy lavender blooms and hydrangea from late June to July, sakura in April and cosmos from late August to September.

There is also a lookout and rest area where you can have a panoramic view of your surroundings – no doubt the perfect backdrop for your holiday snaps.

During the Edo period (1603 – 1868), Katsuyama was a very prosperous lodging town. Most of the traditional infrastructure is still in place even to this day. It was designated as the first historical preservation district in Okayama prefecture in 1985. Enjoy the rich and intriguing history of traditional Japanese wares, samurai residences, galleries and transport yourself to a simpler time.

Onsen are Japanese hot springs and the inns and facilities situated around them and are typically viewed as public bathing houses. Relax and allow your body to be soothed by the hot water and serene environment. Yubara onsen even has a delightful yuzu bath for you to enjoy. This citrus fruit is believed to keep colds and flu at bay and is also renowned for its soothing and calming nature.

Located between the cities of Maniwa and Niimi, the Hokubo dam is the most iconic dam in Okayama prefecture. It was completed in 1980 but has since become one of the most visited places in Okayama.

On March 31, 2005, Kuse, along with the towns of Hokubo, Katsuyama, Ochiai and Yubara, and the villages of Chuka, Kawakami, Mikamo and Yatsuka (all from Maniwa District) were merged to create the city of Maniwa. To ensure that the each individual town’s history is not lost – festivals are held. If you visit in October, you will be able to experience both the Katsuyama and Kuse festivals. The Katsuyama festival celebrates the history and culture of the town and is followed by the Kuse festival a week later.

Have you visited Maniwa City? What would you most like to experience in Japan’s ‘city of flowers’? Let us know in the comments below! Our online recipe section is packed full of tasty sweet and savoury recipe ideas for all seasons and occasions!