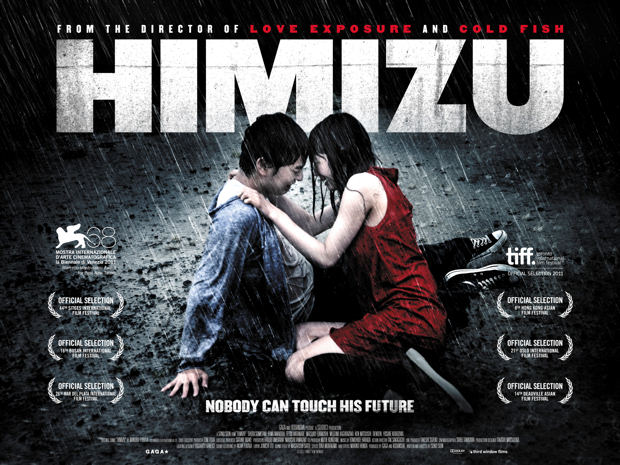 Director Sono’s films up for grabs

To mark the release of ‘Himizu’ [ヒミズ], the 68th Venice Film Festival Marcello Mastroianni Award-winning Japanese film in UK cinemas, Japan Centre is running a competition in conjunction with Third Windows Films for you to be in with a chance of winning two DVDs from Himizu master-director Sion Sono. We’ve got 2 sets of his 4-hour epic Love Exposure and chilling thriller Cold Fish up for grabs, for more information on how to enter please see below.

The theatrical release of the newest film from Sion Sono, Himizu opens in cinemas across the UK on June 1st.

Adapted from the manga of the same name, Himizu is the powerful story of two teenagers’ struggle to live in a dystopian future-Japan destroyed by natural disaster. When young Yuichi is pushed too far he embarks on a violent campaign of revenge against society’s evil doers and it’s up to Keiko who is desperately in love with him to try to bring him back to the path of a decent man. A heart-rending drama and tender love story, Himizu features startling performances from its young leads who won the Marcello Mastroianni Award at the 68th Venice Film Festival.

For more information about screenings make sure to check out Third Window Films.

To enter and be in with a chance of winning Love Exposure & Cold Fish on DVD, all you have to do is leave a comment on this post, our facebook post, or reply to our tweet telling us what in your opinion is the best ‘end of the world’ movie of all time? We will choose 2 lucky winners on Monday June 11th.

Good luck everyone and make sure you keep an eye out for our next Japan Centre competition!

Terms & Conditions: Entrants must be over 18 years old, full postage address will be needed. Cannot be exchanged for cash equivalent.