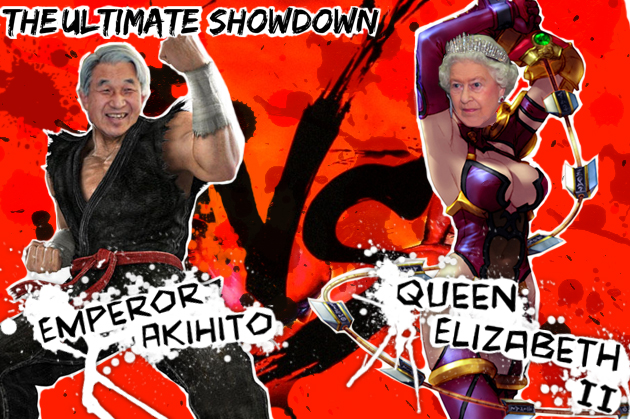 It’s that time again; long weekends, parties on the streets and much merriment in the name of a woman that most of us have never even met! This June sees the Diamond Jubilee of Queen Elizabeth II, Queen of England and all of  its realms and marks the incredible 60 year milestone of her sovereignty. And we aren’t the only nation to go crazy over our monarchs, in fact Japan celebrates their Emperor’s birthday every year on December 21st, where people crowd around the Japanese Imperial Palace hoping to catch a glimpse of the man himself giving a cheery little wave. We love both rulers at Japan Centre but were beginning to wonder if we had to choose, which one do we prefer? Who is more badass? Which one do we think would win in a fight?

Maybe our picture is a little misleading, we’re really not so sure that the Queen would sacrifice her royal dignity in such an outfit and we really don’t think that Emperor Akihito could quite land a Heihachi-style Demon Uppercut but in a battle of facts just which one will come out on top? Read below for Japan Centre’s point-by-point analysis!

Many people of royalty have ridiculously long and fancy titles, it helps give a sense of grandeur, a feeling that these people are different from your everyday human beings, some even have multiple titles like Emperor Akihito. The Emperor is bestowed with two titles, the one he carries now, Emperor Akihito and his post-humous title which he will recieve after he dies: Emperor Heisei. Moreover, he doesn’t have a last name. He’s so important that he doesn’t need a surname. That’s really quite impressive. Unfortunately though, that may not be enough and it’s in the bag here for our Queen, not only does she get the numbers at the end of her name, but she gets a different title in each commonwealth nation, that’s 52 different nations and 52 different titles and that’s without including changes that have been made over the years !They aren’t exactly short titles either, here is her current title in the UK:

“Her Majesty Elizabeth the Second, by the Grace of God, of the United Kingdom of Great Britain and Northern Ireland, and of Her other Realms and Territories, Queen, Head of the Commonwealth, Defender of the Faith”

That’s a longer name than that whip she’s got there. Her other names include ‘Mother of All People’ In British Columbia and ‘The White Heron’ in New Zealand. Round 1 thoroughly owned by Queen Elizabeth.

Royal lines are usually dictated by blood ensuring that each monarch comes from a house of extreme pedigree and those of Britain and Japan are no exception. Queen Elizabeth is a descendent of legendary ruler William the Conquerer and the long-reigning Queen Victoria. It’s an impressive lineage but how does it compare to Emperor Akihito? Unfortunately for Elizabeth,  Akihito really can’t be beaten here. Two words: ‘sun’ and ‘god’. That’s right, according to legend Akihito is directly descended from the Sun Goddess Amaterasu herself. This maybe a legend, but still, it’s pretty epic and wipes the floor with Elizabeth’s dynasty of mere mortals. Winner:  Emperor Akihito.

It may seem like all these two do is attend royal engagements and embark on their hundred millionth world tour but like Transformers there is more to Queen Elizabeth and Emperor Akihito than meets the eye! Like an elderly Megan Fox, The Queen could teach you a thing or two about engines. After joining the Womens Auxiliary Territorial Service she learned how to drive lorries and how to be a mechanic. Although she can’t build a batallion of mecha war machines to attack the world in a blood stained crusade to revive British imperial interests anytime soon we still think that it’s quite cool. Probably a little bit cooler than Emperor Akihito’s specialty: an encyclopedic knowledge of fish. The Emperor is very fond of fish and marine life and has had articles published in several academic journals about Ichthyology and the history of science during the Edo and Meiji Eras. We’re going to throw the Emperor some passion points here, of course neither his nor The Queen’s special skills are going to come in handy in a fight, and as cool as a Queen being able to fix a car is, it just takes so much more dedication and diligence to become that much of an expert on a subject. Emperor Akihito gains an A for effort!

Final round and it’s the cold hard facts that are going to determine our winner! At 86 years of age the Queen is the elder of the two so far her reign of 60 years is almost triple that of Emperor Akihito’s 23 years. Emperor Akihito is also slightly younger and whilst this would make him more spry and slightly more capable of winning in an actual fight, The Queen is the a clear winner in the field of experience. Country-wise, whist the Emperor is reigning monarch in 1, The Queen is head monarch in 16 different countries and the Head of the Commonwealth of 54 nations, blowing all other royals out of the water, with an old empire that stretches all the way across the Americas, Asia and Oceania. Sorry Emperor Akihito but there’s just no way you can win this one, 1 more point for The Queen!

So we finish on a tie. We’ve established that The Queen wins on experience and her ridiculous amounts of titles and honours, whilst the Emperor is from the superior bloodline (though the truth in this lineage is really up for debate) and his passion for sea creatures is a more interesting skill than The Queen’s knowledge of mechanics. We think a tie, however, is sort of cheating everyone out of a victor and we know that that is what you’ve all been reading for. Well, since it’s The Queen’s special day this June we’re going to give it to her, not many have managed such a long run! As for our loser, maybe it will be a different story come this December 21st…