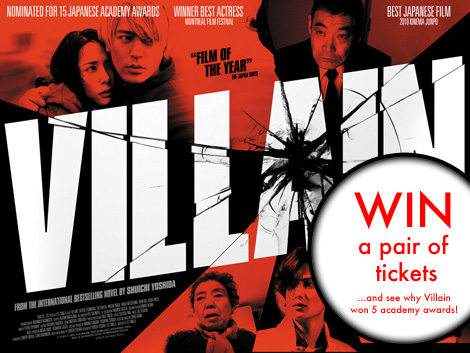 Another week, another great competition! To continue with our Japanese film and theatre prizes, this week we have a wonderful opportunity for two Japan Centre fans to win a pair of tickets to see ‘Villain’, a Japanese crime thriller that critics are calling the “best Japanese film of 2010”!

Read on for details of the film and how to enter the competition.

Yuichi (Satoshi Tsumabuki) is a construction worker who has lived his entire life in a dreary fishing village. With no girlfriend or friends, he spends his days working and looking after his grandparents, with no enjoyment in life other than his car. Meanwhile, Mitsuyo (Eri Fukatsu) also lives a monotonous life pacing between the men’s clothing store where she works and the apartment where she lives with her sister. When the two lonely souls meet using an online dating site, they immediately fall in love with each other. But there’s a secret Yuichi had been keeping from Mitsuyo: Yuichi is the one suspected of killing the woman whose body was found at Mitsue Pass only a few days before…

As Yuichi and his new lover try to elude the police, the events that led up to the murder and its aftermath are revealed. We learn the stories of the victim, the murderer, and their families – stories of loneliness, love hotels, violence and desperation, exposing the inner lives of men and woman who are not everything they appear to be.

A heart rendering story with electrifying performances from the two leads, Villain works both as a powerful character study and as a gripping thriller with enough twists and turns to keep you guessing throughout. 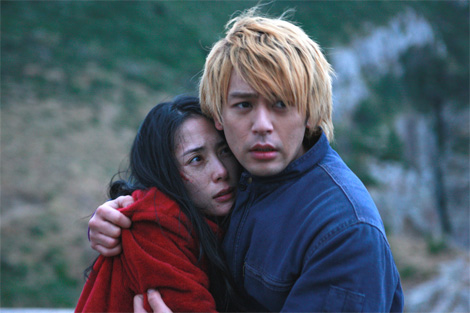 What Can I Win?

This competition is for a chance for two separate winners to win a pair of tickets to see “Villain”, a new Japanese film that is being released at select UK cinemas on the 19th August. We have tickets for the showing at the Institute of Contemporary Arts in London where you can choose any date that the film is showing between Friday 19th August and Thursday 8th September 2011 depending on seat availability. Please contact us if you are the winner of the competition and let us know your preferred date so we can confirm tickets for you.

We have two pairs of tickets for our competition this week so you have double the chance of winning!

How to Enter the Competition?

We will choose a random winner from everyone who leaves a comment on facebook or re-tweets on Friday 19th August and let you know over the weekend if you have been chosen.

Good luck everyone and look out for our new Japan Centre competition next week.