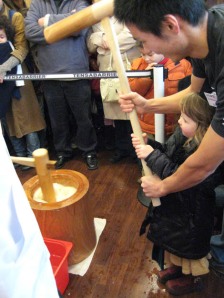 It’s that time of year again! No, not Christmas…it’s that time when Japanese people pound mochi rice cakes with big wooden mallets. Confused? Read on!

Japan Centre is opening its doors to the public for this Japanese New Year tradition for one day only. On 2nd January 2009, from 12 midday, our staff will be demonstrating the unique process of making mochi rice cakes. Kids and adults alike are invited to join in pounding the mochi with the heavy kine (wooden mallet). The chefs will then lay out the pounded mochi and add the azuki red bean filling and serve free of charge to any hungry vistors!

This tradition comes from East Asian folklore of the markings on the moon resembling rabbits making mochi. One story states that a rabbit offered itself as food for one of Buddha’s hungry friends because it was unable to gather food edible to humans. Buddha then drew a picture of a rabbit on the moon for all to see in recognition of the rabbit’s virtue. In ancient Japan, rice was a valuable food used only for special occasions and holidays. Each grain of rice in shinto tradition symbolises a human soul, so pounded rice cakes represent millions of souls together. When Japanese communities pound the rice, each person is to reflect on the gods’ blessings and over the events of the previous year.